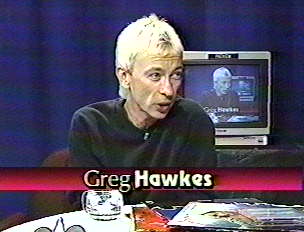 
Things have been very busy at Visual Radio with lots and lots of new programs!
HOWEVER - in honor of the new release by THE NEW CARS and the upcoming tour, we've re-released GREG HAWKES interview with Joe Viglione from May of 1995 11 years later!
It is now airing in:

Lots of new stations are coming onboard. Our intern Chrissy is busy editing the Ted Drozdowski show as well as a new "Best Of Visual Radio". Congrats to Frank McKinney for his appearance with ABC's 20/20 with "Nightline" anchor and award-winning journalist Martin Bashir (best known for making landmark documentaries including "Living with Michael Jackson," and for his exclusive interview with the late Princess Diana). We interviewed Frank first!

Also thanks to Godfather actor Gianni Russo for his appearance on our progam.

#342 Gianni Russo (from THE GODFATHER and SEA BISQUIT)
http://giannirusso.semkhor.com/assets/flash/giannirusso/siteTemplate.htm


Visual Radio is one of the best known Cable Shows of the past ten years! We are currently working on a 5th volume of "The Best Of Visual Radio" and have lots of other programming being edited and ready to air - Willie "Loco" Alexander and
Simon Ritt's The Darlings live at The Lizard Lounge from December, 2005.

The band FOX PASS is scheduled to tape a new show, and Carl Palmer from
Emerson Lake & Palmer on May 31.